An open letter to Donald Trump from a high school teacher

HuffPost published my letter to Mr. Trump. Click here to see it on HuffPost.

Since you announced your candidacy for President, teaching high school social studies has become more interesting. Other than comedians, students have gained more from your White House run than anyone. 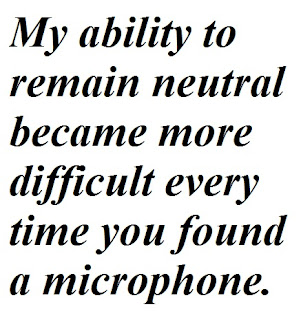 As a high school American government teacher, I recognize that you are in a great position to win the nomination. The U.S. Constitution and the values it embodies serve as the foundation of our curriculum, so when my students ask questions about the election, the role of the president and you, their interest brings more meaning to our discourse.

Mr. Trump, taking questions about you has been a challenge. The cornerstone of your immigration policy includes building a "great wall" and having Mexico pay for it, so naturally students have questions. When you said, "Look at that face! Would anyone vote for that?" about opponent Carly Fiorina, students wondered about your character. As you talked about "bombing the (expletive)" out of enemies and killing their families or banning all Muslims from entering the country, we took notice in class.

Mr. Trump, you have put me in a precarious position as a professional educator. My ability to remain neutral, as you brazenly assault the American values I have spent my career promoting, became more difficult every time you found a microphone. Referring to African Americans as, "the blacks" and bragging publicly about having a young "beautiful piece of (expletive)" are just a couple of the red flags my students have raised in class.

Mr. Trump, behavior like yours in a classroom would stifle learning and make parents cringe.

You actually referenced your penis size in a national debate and publicly denigrated the appearance of a political rival's wife. Your preposterous comments and arrogance justify students' concerns about your temperament. For many of my students, who study history and defend the Bill of Rights, it is inconceivable for them to support you.

At one time, we laughed at your antics. We had never heard a political figure say the things you were saying and in a manner that defied even modest political calculations. As you sunk to new lows, students became victims of the circus atmosphere you were creating.

Mr. Trump, not taking you seriously was a mistake I deeply regret - as a teacher and as a citizen. 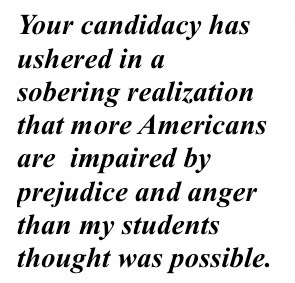 Your candidacy has ushered in a sobering realization that more Americans are impaired by prejudice and anger than my students thought was possible. Mr. Trump, you have reached millions of people with a disturbing political message and nasty tactics. Your behavior is repulsive, but professional integrity requires that I attempt to understand your appeal.

Mistakenly, I expected that decency would always have a role in any legitimate campaign for president. As a veteran teacher, I failed to recognize the consequences of the depraved manner in which you peddle fear to hungry crowds. We never saw your rise coming. Once the laughter died down you were leading the Republican field by huge margins, and the teacher became the student.

Your lively political rallies with threats of violence and lessons about greatness woke me up. The punchlines became storylines that paint a picture of a hopeless, deeply confused nation. You are enthusiastically leading an insurgency against goodwill that my students will spend a lifetime undoing.

Yet, I remain optimistic about the future of our nation in the face of your existence.

Mr. Trump, I am hopeful because my students are gaining a deeper appreciation of American values like promoting the common good and fighting for equality. Students are embracing diversity and individual rights as those values come to life on the campaign trail. Student attitudes are being shaped, in part, by opposition to your toxic rhetoric. As many students prepare to vote, they recognize the threat your presidency would pose to the world.

Mr. Trump, at worst your popularity is a cruel reminder that many of our neighbors and friends have xenophobic leanings and a worldview skewed by sexism and bigotry. At best, your entertainment value has clouded the judgment of too many voters. 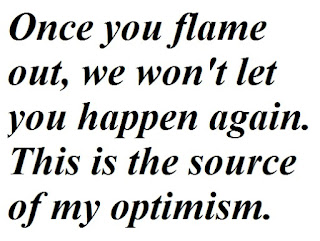 Regardless, for my curious students, you are their first living lesson on the perils of populist racism. Hatred and bigotry, really bad ideas before you came along, are now alive for first-hand analysis in every classroom coast to coast. You are energizing a generation of young people to fight back.

Once you flame out, they won't let you happen again. This is the source of my optimism.

Instead of teasing modern angles out of the lessons from Jim Crow America, we have you: a national political figure exposing the ugliness that occurs when power and bigotry mix in the absence of humility. In social studies classrooms, divergent points of view and civil dialogue co-exist. Your absence on the national stage will encourage informed conversation that will advance progress. The lessons we learn from your disgraceful campaign will live much longer than the harm you inflict today.

Today, you are trending. Tomorrow, your story will be the one about the damage that is unleashed when fear controls the political narrative. The lesson about how slowly the electorate digested your hostile message about American greatness will stay with us a long time, Mr. Trump. Your candidacy will be a lesson about temptation and averting disaster.

Mr. Trump, you are a reminder that progress is not dependent on a specific political party or the ambitions of one man. Advancing American democracy demands a citizenry that is vigilant and informed.

ABOUT THE AUTHOR of CIVICS ENGAGED: Nick Gregory has been a social studies and journalism teacher at Fenton High School since 2000 and he has been a National Writing Project Teacher consultant and a junior varsity basketball coach since 2003. Gregory is a Michigan Education Voice Fellow and he has exhibited photography related to Detroit and social justice causes since 2011. Gregory, who has a Masters degree in Educational Leadership, believes that building positive relationships helps students find their passion for learning. You can follow him on Twitter @CivicsEngaged.
Posted by Nick Gregory TWITTER: @CivicsEngaged at 8:52 AM